Survival of the Rookies 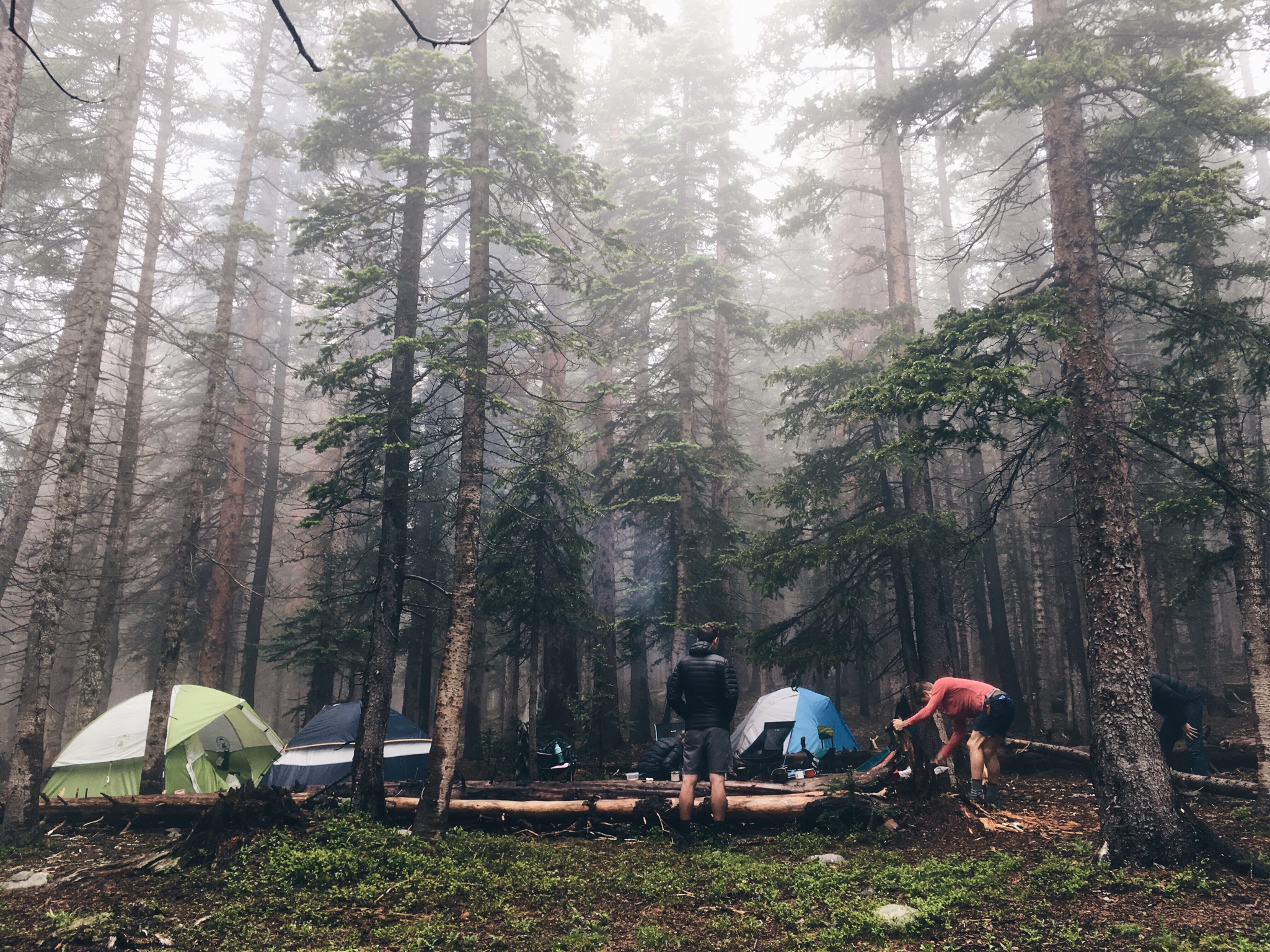 We went on a backpacking trip recently, and lest the breathtaking photos lead you astray, I’m going to lay down the deets of truly what went down.

First of all, we went to Colorado which is 13 hours from our house, and since we conveniently have a brother living about a third of the distance from here to there we split the trip into two days. We left quite early in the morning but still didn't start the 3 mile hike to our camp site until around 3 or 4. Rookie mistake. The hike was harder than we thought, made all the harder by a considerable amount of wind and rain which not only limited our usual outpouring of strength but also goodwill. Many of us lost hope, I cannot say that I succumbed to it. I am quite pleased to say that after years and years of completely sucking at climbing mountains (and exertion in general) I am now quite equal to the task. People say the Future is Female but I say the Future is What You Make It. And I don’t think anyone’s ever said that before.

After climbing and climbing to a 11,500’ elevation, crossing a windy mountain top, down into a valley, only to cross a raging stream on a slippery log, and then the switchbacks up to the lake we reached our destination. We never saw the lake that day, but we saw a sign that said we were 300’ from it, and we hustled to find a place to set up our tents. After setting up our tents (Oh, did you forget that it’s been raining this whole time?! Don’t forget that, it really puts everything in perspective) we were freezing. Literally I couldn’t feel parts of my hands and I was freaking out inside. I even said “WHY WON’T IT STOP RAINING?!?” at one point in my most aggravated tone, and I must say, that was my low point. Because of the raining, after considerable attempting the consensus was that we could not start a fire with the wet wood, and it was dark by this time, so even though we really needed some water and food, all we did was eat a granola bar, toss our bear bag out into the woods, and tuck into our sleeping bags to warm each other up. I was pretty scared at this point, I did not wear warm enough clothes for this, didn’t pack them either, and I was the coldest I’ve ever been, and we were in the middle of a dark forest with God-knows-what. We attempted to go to sleep around 8 or so (who looks at clocks in the wilderness?) after the feeling came back in our hands and feet. I wasn’t comfortable at all, arms kept falling asleep, I was so thirsty, and had a splitting headache, and then at one point (after what seemed like a week of nighttime, but was a disappointing hour or so) Adam told me “I’m having a hard time breathing. I keep jolting awake gasping for air. So, if you notice I’m not breathing, wake me up.” …

…Needless to say, I slept none. I dozed off a couple of times, but then would notice Adam wasn’t breathing anymore so I’d wake him up. How in the world did we decide this was a good idea?! We can’t even breathe up here! These, my thoughts, were quite frantic. One of those frantics where you really would like to do something, anything, but the only thing to do is to lay down and pretend like you’re resting. Oxymoronical behavior if you ask me. And then a couple of times I realized that Ben was puking all of his guts out into the woods and I thought we might die. I even wondered at what point on the way to death we would go scratch on our friends’ tents and tell them we were going to die, or would we always be trying to play it cool and not make a big deal about it and then just be dead?

Strangely after being awake all night, once I noticed the sun was coming up I dozed off for an hour. So refreshing.

It ended up we all lived until morning, nursing several different versions of altitude sickness. It’s a real thing, people. The splittingest of headaches, makes you even black out sometimes. It had stopped raining though, and I made coffee and oats with all of the fixings for breakfast, we lacked no good thing. We gathered lots of water all day and that seemed to help the altitude sickness at different points. Also, eating. Also, the tremendous beauty of the woods and the lake and the surrounding mountains. The day really picked up once we realized we’d really truly lived through some serious challenges, and we could build fires, and cook meals, and catch fish with our bare hands, and poop in the woods. My absolute favorite part was sitting around the fire, figuring out how to cook on the fire in our tiny pots, and making little platforms with the coals to set pots on to steady them. It sounds so simple, but it was so much fun. I love learning ways to be more self-sufficient; no boxes, no instructions, no factory-made, easy-peasy we-did-everything-for-you-because-we-know-you-don’t-have-time-to-be-a-human rubbish. But just learning from trial and error and figuring out how to get on by the power of your own wits. It’s so lovely to step away from all the systematic American to-dos, competition and money-making and schedule-making lives, and just do what you need to survive. Gather wood, dig a hole, poop in it, build a fire, eat, tell stories, walk to the river, drink the water, eat, don’t panic.

Ah, and special tribute should be made to the soft, mossy forest floor. I loved walking on it, it was the softest and most wonderful carpet in all of this world. The forest smelled like pine and earth, and in the morning the fog rested among the trees and surrounded us in the glorious splendor of unadulterated nature. Such clean air and such beauty, it makes you feel like you’re not really that important, what you do and what your talents are are really not the point, the point is experiencing and admiring.

That second evening it started raining again so I quickly made some (amazing) dinner because Adam’s headache was getting quite severe and I thought eating would help. I brought the food into our tent where Adam was laying down, and it was pouring. Pouring outside and inside the tent… on my face. I wasn’t crying it was just raining on my face. ;) ;) But seriously, Adam didn’t feel like eating and just needed some water and sleep, and then I cried a lot and didn’t feel like eating either. That was unfortunate, because that meal was quite an accomplishment over the fire. But I’m counting it as a practice shot, now for sure I know I can make a good meal that we’ll actually eat someday. And the tears were because life is hard, you guys, and I’m pretty exhausted of watching the ones I love suffer. But the thing about life is you get tired, you get frustrated, you blow up inside, sometimes at God, and then it just keeps going on, and you calm down, you read some Harry Potter by lamplight, listen to the rain inches above your head, you toss your food out into the woods, you pray God sees you and hears you and keeps you safe in your coma of headache, and you fall asleep. And you actually sleep. Sometimes.

In the morning we dawdled a bit around breakfast and then cleaned up camp and headed back down the mountain. It was sunny this time and we really warmed up, short-sleeves and everything. The mosquitos decided to let us know they call that place home too, and Adam and I high-tailed it down the mountain surrounded by swarms of mosquitos like the Berenstein Bears when they’re looking for a great picnic spot. It took a fraction of the time to go down as it took to climb, so naturally we felt like we had really gotten the hang of it and were super cool people.

And that’s it. We survived. People keep asking me how it was and I think everyone’s really hoping that the descriptive word for your vacation is “fun”, but it wasn’t fun. It was fun at points, but more than anything it was challenging. However, I felt like I was really benefited by the challenge. Nothing much builds your confidence more than being challenged and surviving, proving to yourself you’re stronger than you thought. I’ve seen a lot of fear in myself and in the people around me in the past few years and I’ve noticed that we fear things mainly because we haven’t encountered them before, merely due to the unfamiliarity of it. We’re afraid to be in pain because we’ve always been strong, we’re afraid of being alone because we’ve always been accompanied, we’re afraid we might freeze because we haven’t been that cold before, but then you see it, you meet it, you move through it, and you realize that even though you haven’t done that yet doesn’t you mean you can’t do it. You’re stronger than you think you are. I think if I can learn to not let unfamiliarity cause fear and not allow it to make me lose confidence in myself and in God I’ll be a much calmer and braver person. I was telling this to my friend, Kate, who was with us on our trip (and who can start a good cooking fire like no one’s business) and she said “It’s amazing how you can trace all your issues back to a root of fear too. And yet if we only knew the depths of God’s love we would know we have no reason to fear. Guess that’s why the Bible says perfect love casts out fear.” Yes, Kate. Yes.

I’m trying to embrace the allure of adventure. Pull away from the need for safety and certainty, test the faithfulness of God a bit, test the strength of myself a bit. I want to be the kind of person who can lie in danger and still sleep, find rest in the turmoil. I’m so tired of fear, I’ve seen what it has to offer, and it’s really quite a rip-off. You’re not gonna get much out of life if you will only be pleased with it being one, safe way. It’s not going to be safe, it can’t be, if it were we’d be bored out of our minds, and have no character. So yes, I’m going to go backpacking again, and I’m going to drink more water, bring warmer clothes, bring a tarp, and not panic.