A walk down a block of Memory Lane

I often have the habit of sitting at my computer with a coffee in one hand, painstakingly attempting a fluid one-handed typing progress. It’s a mistake. It’s just… that coffee is so good, you know? I feel like I might be betraying it if I set it down, and it knows how good it is. It really stinks when you really think you’re probably awesome at something and no one cares. And I know this, so I hold my coffee; my good, Intelligentsia, french pressed, burr ground, heavy whipping creamed coffee. Adam brought it to me this morning, which is why it’s whipping creamed. That boy. He knows what’s good.

These dates last year, which fell on a weekend last year, were a pretty big deal for me. It started out on July 31st, we were on tour in Indiana, sleeping at an airport motel. I have since heard that they are the most dangerous hotels, information which was now really quite useless to me because I figured that out already from the hard knocks of life. I have observed that when I discover something new I say ‘Hmm, I’ve never heard that before… that’s interesting’, and then after knowing it, I hear people talk about it all the time. I always wonder why I never heard it before, or if I did and just had utterly no idea how to absorb the information. Oh, but back to my story. Ok, we’re in Indiana, I unassumingly start my day nonchalantly, I probably said ‘Good morning’ to Adam (Nebraska boy) and ran a couple miles in the fitness room, came back to the room and got showered, and was sitting on the bed IMing with Adam (those were the days… not). Savannah (my brother’s then girlfriend) walked in and said really calmly that someone had broken into our van. I, of course, felt immediate alarm, and freaked out a little bit yet she was still very calm and said that nothing was taken. However, I knew what I had in the van, and there was no way it survived a thievery attack. I popped off the bed and ran out to the van, which took forever because the motel was huge and the whole time I just knew all my stuff was gone. I ran into Mom and Dad on the way out and they came with me and we got in the van and I could see already as soon as I opened the door that it was all gone. I had very foolishly left my purse and camera bag in the van. I did this a lot because I got tired of bringing 5 bags into the motel every night, and I never did that again. I had a Canon Rebel XSi, a polaroid camera and a sweet camera case, my (awesome, yellow) purse which held my wallet, Bible, journal that I shared with Adam, and a few other things that you don’t realize you had in there until days later and then you’re frustrated all over again. It rounded up to about $800 worth of stuff, which could not be returned to me. We talked with the police, and they didn’t do much other than take an inventory of stuff that was stolen, I think they might have caught him if he’d walked into the station and handed in my things. After crying really hard, with my patient Mom hugging me, and calling Adam who probably couldn’t understand anything I said, I took a long lap around the motel with some family members looking for anything they might have discarded on their way out, but no, they took everything. Thankfully they didn’t get into our trailer, which had all our equipment and livelihood in it. Some things which are irreplaceable. We really were fortunate. It just stunk for me. In a nutshell, (why does the nutshell come after the long story?) it was a bad weekend for me. I felt really weird and invaded and things-less. It was also Saturday morning, I called and cancelled my debit card but I couldn’t talk to the bank until Monday and see if they’d taken my money. Frustration.

I was doing better by the time we got home on Monday. The thing I was mostly bummed about was the loss of my camera. Occasionally I still miss my awesome yellow purse. But I can recover from those feelings pretty quickly.

Ok, so here’s a little tidbit, Adam has a thing for surprises. He’s stinking good at it. It’s ridiculous. He lived 500 miles from me, and we talked a lot during the day, and somehow he would still show up on my back deck every now and again and I would have no idea he was in Arkansas! But he didn’t always show up in Arkansas, he would show up other places too, just walking through a building, turn a corner, and oh, it’s Adam. One time I didn’t even recognize him because I was so not expecting to see his face. Alright, I was kind of getting used to the fact that Adam would sometimes be surprising me and I had learned to recognize the signs. First thing I noticed on Monday morning was that he was not at his computer, which he normally was, and I could tell this because when he typed on his computer he didn’t capitalize his sentences, and his phone did it automatically. I asked where he was and his answer was ‘I spent the night at my parents’ last night’. Yeah, dodger!

I thought he was going to be at my house when we got home. He wasn’t. We went to a softball game and I thought he might be there. He wasn’t. I got back home. He wasn’t. I was so bummed, I actually texted him and told him I thought he was going to be here for some reason today and now I was really disappointed. He called me and said how sorry he was. Yeah yeah. Mom asked me if I wanted to watch Julie & Julia with her and I did, because it’s partially based in France, and cooking is, well, awesome. I can’t remember if I ever finished it but towards the end I got a text of this picture 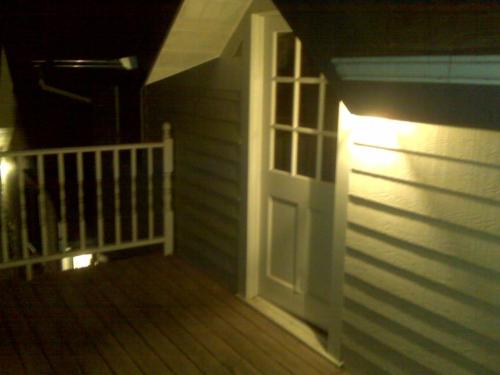 which is my back door.

Yeah. I went ‘Ah!’ and booted it to the stairs and came into my room and saw a glow on the back deck. Candles all over and my dear (sweating) Adam standing there. I came and gave him a hug and felt how fast his heart was beating and I knew. Sure enough, we were gonna get married.

So that was this week last year. Kind of a big deal. Now we’re married and Adam makes me coffee in the morning and I get to listen to him and his homeboys have their stand-up meetings and his podcasts about Rails (I’m basically a web developer now), I bake him his Grandma’s caramel rolls, he teaches me how to do all the scary things, and we go grocery shopping together. Actually, I drop Adam off at the Starbucks inside the grocery store and I go grocery shopping. A man’s gotta work. Adam recently acquired a new job. Saving the world, one website at a time. You know how it go.