It seems that the adjective ‘interesting’ is following us to our beds at night, grabbing the covers and climbing right in, because we cannot have normal nights anymore! It leaves us laughing and yawning during our morning coffee and, you know, perhaps leads towards some blog posts. I don’t know, maybe like this one. Yes! another weird night post!

The night before last a bunch of rambunctious kids-I say ‘kids’, but they’re probably my age, I just grew up really fast- decided to set off fireworks literally right behind our apartment building. Some of the flares came dropping by in front of our windows. All the popping woke me up at about midnight and I leaned over to say something about it to Adam and this time he was just sleeping soundly. He was probably afraid of what his subconscious would do in the night so he turned it off. I was left to listen to the fireworks alone. In the middle of the night. (yes, we now go to bed before midnight. They warned us this would happen.)

Last night we were house/dog-sitting for some friends of ours out in the country. They have a giant Great Dane named Liberty. She’s a really calm dog, kinda lazy, so she’s pretty easy to watch. Except, she’s afraid of storms in the night. So am I, and my niece Ashlyn, but she puts our fears to shame. No creature can be more afraid of storms than this dog. She woke up at about 3 a.m. and started shuffling around the room, I heard her, because I’m a pretty light sleeper and wondered what in the world she was doing (everything sounds really strange and foreign to me in the night) and after her shuffling around for about 20 min she began to pace, and then she started making laps, while growling deep in her throat. I could only faintly hear some thunder and there was one flash of lightning, apparently she could sense it before me: a mere human. She’s a big dog with a big voice and she’s pretty good at throaty growls, (so is Adam), so I was basically surrounded by deep voices. By this time Adam was awake; it’s pretty hard to sleep with a lion-sized creature pacing and groaning in your bedroom. I’m not sure what our friends normally do for her when she’s scared but apparently we weren’t very helpful in soothing her. We turned on the lights hoping that would keep her from seeing the lightning, and we turned on some soothing classical music to mask the thunder, and it all helped for a bit but then she got back to her pacing. They have a big king size bed and she would go from one side to the other, looking at each of us in turn, and setting her massive head right on the mattress, which reaches all the way to us, in the center, touching her nose on our knees, and one time I opened my eyes and her nose was right at my chin. She would just groan and growl a little bit, but then she started barking. Really barking. I covered my ears and my eyes. Adam kept telling me to just curl up to him. I’m not a big dog person, so I don’t really know what to do with them, and she was pretty scared, and since she doesn’t know us I was a little afraid she might get angry. She looked a little hazardous a couple of times, so I just covered my eyes. If I can’t see her, she’s not there. A lesson I learned as a child. Finally around 5 a.m. or so she started calming down and I fell asleep and when I woke up she was curled up by the top of my side of the bed, (not at all where her pillow is) and she had graced us with a little turdnugget present on the carpet. We’re learning a lot about parenting. Parenting a calm and fearful lion with a big voice. I can’t wait to see what happens tonight! 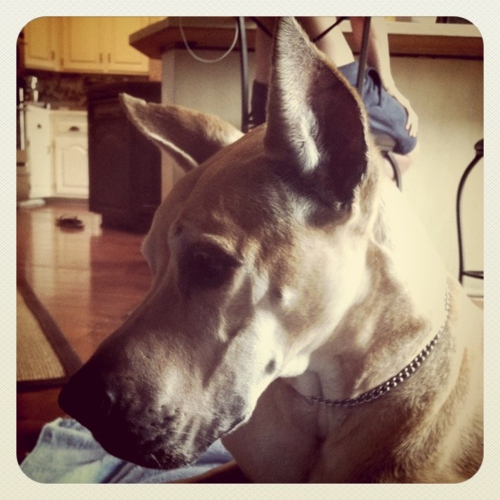 Aaand, I just saw a girl I know on a lingerie commercial. Can’t get much more awkward than that.